Wah! Can you guys believe it? Just over 6 weeks and book 2 of the Haasji Settlement Bride Series will be out! Its available for preorder now here if you’d like to pick up a copy. 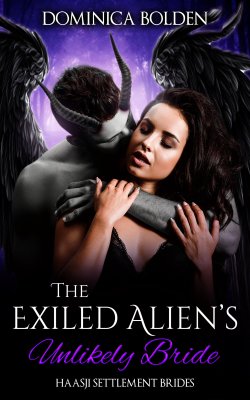 Her sister had married an alien. It hadn’t even truly registered with Stephanie Delour that Mallory was gone until she found herself locked out of their old home.

She knew that Mallory had scrimped and saved where she could, but with the discovery that her sister had sold herself to an alien for the treatment, Stephanie pushed herself through recovery.

Running off with the money wasn’t an option.

So, Stephanie decided to find her sister in order to… Well, she wasn’t entirely sure what she was going to do. She just knew that a life among the stars wasn’t as appealing as it used to be. Not with Mallory’s fate looming over her head.

Not without her beloved big sister by her side.

Qui’da had come to regret not giving his sister-in-law a chance, all because she was a human. And now the entire flock, his family included, had turned their backs on him. Given the option to either lose his wings or work with the humans, he chose the latter.

Losing his wings wasn’t an option.

But forced into close proximity with the wingless rats wasn’t much of one either. Unfortunately for him, he would be forced to work alongside an infuriating woman, while traipsing across the planet to find his old flock.

Dominica Bolden lives in eastern Tennessee. When she isn't working on one of her many novels, novellas, short stories, or poetry, she's taking care of her children along with her adoring husband. View all posts by Dominica Bolden